Since 2001, when it was constructed by the Federal Government and opened for public use alongside five others, the Ajegunle PHC has not undergone any form of  infrastructural rehabilitation, staff rationalisation or refurbishment of equipment.

The Centre which was meant to care for child delivery and  management of other health complications and primarily paediatric related issues, is today a shadow of its self.

Facts show that the Federal government aimed to utilise the  facility to bring primary health services closer to the grassroots, as mooted and championed by former Minister for Health, Late Professor Olikoye Ransome Kuti. But, 12 years down the line, the dream of that goal has been truncated.

Good Health Weekly investigations revealed that although the Centre was built by the Federal government, it was handed over to the Lagos state government several years ago, before the State, in  turn, passed it to the local government and then down to the community.

It was gathered that   previous administrations did not make adequate effort to intercede on behalf of the ailing  Centre,and it is now grossly under-utilised and  currently bogged down by plethora of administrative and infrastructural problems  and  is constituting  serious threat to the wellbeing of residents of the area. 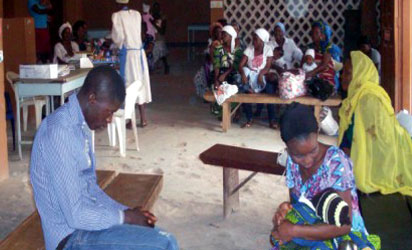 patients waiting without anybody to attend to them

More findings show that  there are just  four  bonafide staff at the Centre who habitually report  late for  work or  fail to show up at all.  Patients at the Centre confirm  there is usually no doctor on call at any time of the day, and the only  qualified  and experienced staff is the Head of the nursing unit. Other staff are ad-hoc staff, privately recruited or hospital-trained nurses and’ health workers.

Good Health Weekly discovered that in view of the chronic shortage of qualified medical staff, it is not uncommon for  cleaners and sweepers to take up the task of administering drugs and even injections to children. The Centre, which, normally, should  run 24 hours daily, remains open for just a few hours and is idle  most of the day.

As a result, patients who turn up for  treatment  and other services  wait endlessly for attention. Findings showed that it is at least a decade ago that the delivery of any baby was  recorded there. No drugs or medical consumables of any sort are being provided. Everything is bought or brought by the patient

A  visit to the Centre on one of the two weekly post-antenatal clinic days, reveals a structure  wearing a forlorn look of dilapidation, decrepitation, and desolation. There is dirt and  unkempt everywhere. The  surroundings, including the road leading up to the premises is overgrown with weeds.

Signs of farming are obvious within the open vast of land but a collapsed long section of the perimeter wall  remains unfixed.

The  building itself, which at inception,  was adequately equipped with modem  hospital equipment, is now  an empty carcass – its valuable stock of equipment either looted, damaged or obsolete.

The reception is in shambles, the waiting room  in disarray and unbefitting of a health institution. There are huge cracks on the  walls, rodents run about freely, and the electrical fittings a potential hazard.

There is no running water. Taps are dry because the only borehole on the premises has long stopped functioning. With no reliable source of water, patients resort to purchasing and utilising packaged water (pure water) sachets.

On such day, it is commonplace to observe mothers improvising with packaged  water sachets to step down their children’s high body temperatures before injections can be administered. Expectedly, the premises is littered with empty packaged water sachets.

The septic tank (soak-away) is collapsed and toilet facilities are severly deplorable.  In so many other ways is the degree of rot  phenomenal.

Patients  confirm that drugs are never available because there is no straight forward and committed administrative mechanism for purchasing and distributing drugs at the Centre. It was gathered that nurses ont only dispense, but also sell drugs.

They complain of an arrangement  through which the nurses, cleaners and other staff including members of a  caretaker committee  monitorng the Centre,  take advantage of  these lapses, to purchase drugs on private basis and resell to patients.

Efforts to get the Chairman, Ifako-Ijaiye Local Government Area to comment on the issue were unfruitful as he could not be reached. Good Health Weekly also attempted to speak to the Chairman, Ojokoro LCDA,  Alhaji Amusat Azeez but he was  said to have travelled abroad.

However, in a reaction to the development, the 2nd Vice Chairman, Ojokoro Joint CDA,  Chief Olufemi Olusola Davies, gave a graphic picture of the challenge faced by the Centre.

Davies, who is also  Chairman, Ward G, under which the PHC is domiciled, acknowleged that the LGA is labelling the PHC a Federal institution. 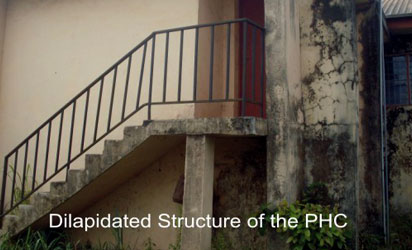 “The Local Government has abandoned the PHC, and pushed its problems to Ojokoro CDC to cope with,” he remarked in a telephone interview.

“When I came on as the 2nd Vice Chairman of the LCDA,  the PHC being in my Ward, I organised people from different CDAs to join me to ensure that we bring the PHC back on track. I organised and reconstituted another committee to take charge  but since that was done , we have not really started, mainly because we need funds to go on.

“We are not getting these funds from the LGA.  I asked the entire CDC including the 92 CDAs to help out, we are trying to bring the attention of the state government.

In his narration, Davies recalled that in  January 2012,  when Governor Babatunde Fashola visited the LGA, during the cross-border campaign against polio between Lagos and Ogun state, he was there andI  mentioned the condition of the PHC to the Governor.

“The Governor replied just once.  I was expecting something would have been done but nothing has been done . As Chairman,  if I can get support from the state  government, I will put things right,” he attested.

Also in a chat, Omo-Oba Ademola Odusote, a concerned member of the committee,  lamented the development. “We have this edifice that has been lying fallow since 2003. We were elected by the commubity to look after the Centre.

“We went there and found that the place was rotten. We wrote  to the Local Government Council.  We went around, identified the problems and made recommendations on what is to be done, but till today, no response on the request about the state of the PHC has been obtained.”

Also speaking, another concerned party, Mr. Adeyemi Adesina, Chairman, Akinde/Karan, CDA, observes that  “there only appears to be a semblance of activity there because  of the  two days of  post-natal care clinics held weekly.

“The place is in shambles, without water or toilets. devoid of alll structure of a PHC of that standard.We are  calling  attention of those in charge to come to the rescue of the people, he remarked.”

Residents of Ward G, Ojokoro LCDA, are still baffled by the deplorable condition of  their  PHC. Already,  there are doubts about the safety and reliability of diagnoses and treatments carried out at the Centre owing to the aforementioned issues.

Even as they now depend on primary health facilities at  Oke-Odo, and  private hospitals in adjoining communities in neighbouring Ogun State  their  hope and expectation is for the authorities to step in and take urgent and decisve action to turn its fortunes around for the better.

They want the state and Federal governments to come to terms over the Centre, for the sake of the people.

Even as a big question mark lies over an annual allocation of N2 million that is accruable to the PHC since 2003 and no one appears to be in the know the status of the allocation.

Part of their expectation is that the LGA should repair the road to the health Centre and provide adequate and qualified staff such as Youth Corper doctors in order to give the community  something to show for its travails.

It was gathered that trouble began after the creation of Ojokoro LCDA,when some miscreants vandalised the facilities.

They also want  the Federal Ministry of Health to come up with clear-cut and straight forward guideline for the running and maintenance of the  Centre,  urgently rehabilitate it supply with modern-day equipment and hand it over to a new management committee.

The Federal Ministry of Health should also investigate the allegations of sharp practices with a view to prosecuting those found culpable  mismanagement of funds meant for the Centre and  ensure that in future,  funds are disbursed regularly to the Centre and  effectively utilised and closely monitored.