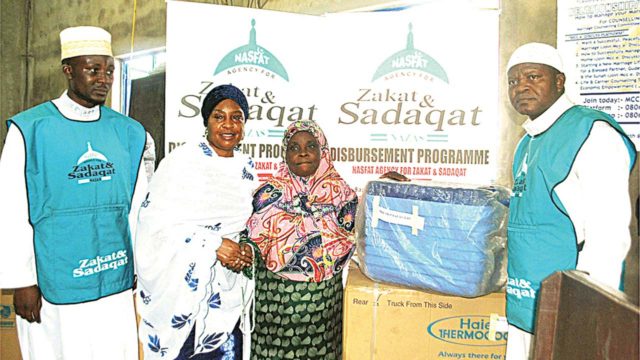 L-R: Olusesi Tajudeen; Alhaja Suwebat Kupolati; beneficiary of Deep Freezer, Mrs. Shittu Kudiratt; and Alh. Ahmed Olanrewaju, during the NASFAT Lagos zone one Ramandhan lecture/ NAZAS empowernment programme in Lagos
In order to create peaceful co-existence between the poor and the rich and maintain balance in the society, Islam strongly advocates charity as one of means of sharing wealth to cater for the others while it also emphasizes the issue of feeding and empowering the poor.
Fulfilling this injunction, NASFAT Agency for Zakat and Sadaqat, NAZAS an off-shoot of NASFAT, an NGO saddled with the responsibility of taking care of the needy in the society, last weekend empowered some beneficiaries with gift items and cash donations during an annual Ramadan lecture organized by NASFAT Surulere branch at the National Stadium Mosque in Lagos under the watchful eyes of some dignitaries and Alhaji Shamusudeen Oladele Afunku who represented NAZAS chairman, Mr. Niyi Yusuf.
The agency was formally launched on June 21, 2014, which coincided with the first day of Ramadan. Committed to touching lives, the agency swung into action immediately through empowerment and scholarship programmes, which cuts across primary, secondary, tertiary, visually impaired, law school and prison inmates. The agency’s benevolent act is not limited to individuals alone, as it had reached out to the vulnerable within the society through donations of relief materials to the Internally Displaced Persons (IDP). Also, through its public health initiative, the agency has been collaborating with Islamic Medical Association of Nigeria (IMAN) to provide free medical services to the downtrodden in underserved locations.
Headed by its chairman Mr. Niyi Yusuf, the agency was able to achieve all of this with the support and commitments of the donors and kind-hearted Nigerians who have volunteered to part with some of their yearly earnings in form of Zakat. So far, the agency has spent over 70 million in humanitarian activities, providing succor to the less privileged in the society.
At the event, a few of the beneficiaries couldn’t hide their joy as they matched forward to receive cash donations ranging from N200, 000 to N250,000 and gift items such as deep freezers, coolers, photocopy machine and so on.
For Lukman Oluwo, a physically challenged young man from Shomolu, it was a moment of shock and excitement for him having received N200, 000 to start his water and soft drink business. Oluwo’s story was pathetic having been short-changed by a relation he once lived with. “I was assisting my mother in her petty trading when I was empowered by NAZAS through NASFAT Ikeja branch. I bought deep freezer and my business was going on fine. Unfortunately I was short-changed by a relation who took advantage of my predicament. He seized all these things, pushed me to the street and ran away. With this N200, 000 from NAZAS, I will build a container and start up my business and by the grace of God I will rise up again. I am grateful to NAZAS.”
Hazizat Adelagun Arike, a trader from Mushin area who received cash donation of N200, 000 has a pathetic story to tell. She was murmuring to herself. “Is this me?”

“I currently sleep in the Mosque but God used these kind-hearted individuals through NAZAS to put an end to my homelessness and resuscitate my business. I am a petty trader trading in pure water and soft drinks. But due to life’s challenge I have been struggling as I currently live in the mosque. With this money I will get an accommodation and put my business back on track. I pray to God to continue to be with them and their families.”
Shittu Sherifat, a petty trader also got a cheque of 250, 000 to boost her trade. “Honestly, NAZAS is God-sent. I am a trader selling lady’s wears and household utensils. I hawk around moving from one complex to another. I heard about this NAZAS through member of NASFAT Ikeja. I obtained the form in 2014 and God remembered me through them. I didn’t expect it. I didn’t know anybody among them. I got married and moved to Ibadan. This money has put an end to my hawking as I would go and rent a shop,” Shittu said in an emotion-laden voice.
The disbursement exercise was preceded by a Ramadan lecture delivered by two guest speakers; Alhaji Daud Oniyide and Alhaji Isiak Folorunsho Faagba, who both spoke on “The Benefits of Giving in Islam.”

​​‘Brokers can generate S1m in Lagos’